Each week, Wess shares what is in his pull list at his local comic shop (LCS). But this week, he’s on vacation so you’re getting Wess’ reading list for this week. These are books that Wess brought on vacation to catch up on or new items he picked up at a LCS.
A.D. After Death
Written by: Scott Snyder Art by: Jeff Lemire
Words by: Steve Wands
Published by: Image Comics
I’ve written at length about A.D. After Death before so I won’t go into too much detail here other than to say: you need to go get this. Beyond being such a great concept and a great story by two juggernaut creators, it’s also such a unique book. It could have been published strictly as a one-shot graphic novel but instead is spread out as three separate issues until being collected in this edition. The mix of prose and graphic art is such a unique concept and only serves to enhance the story it supports. Again: stop reading this and go get it! 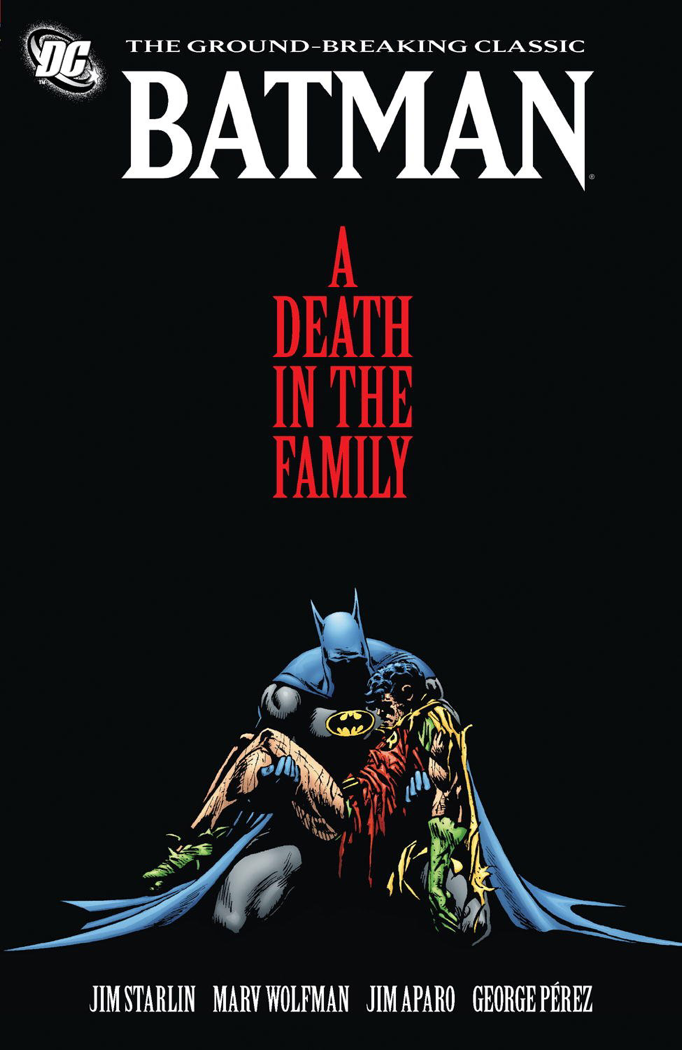 Batman: A Death in the Family
Written by: Jim Starlin, Marv Wolfman, & George Perez
Pencils by: Jim Aparo & Tom Grummett
Inks by: Mike DeCarlo & Bob McLead
Colors by: Adrienne Roy
Letters by: John Costanza
Published by: DC Comics
I’ve read “A Death in the Family” before but never owned the trade before, so when I found it for sale for 50% off at Memory Lane Comics I decided it was time to pick it up. Imagine my surprise when I realized that this also included “A Lonley Place of Dying” - the story of Tim Drake becoming Robin. With “A Lonely Place of Living” coming soon in Detective Comics, this was really an added bonus. These two stories aren’t necessarily regarded in Batman lore as the “best” stories featuring the Dark Knight, but they are definitely some of the most important in Batman’s history. Both of these moments had a profound impact on Bruce and are still referenced repeatedly over the last few decades. 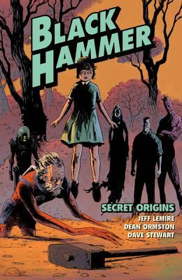 Black Hammer Vol. 1: Secret Origins
Written by: Jeff Lemire
Art by: Dean Ormston
Colors by: Dave Stewart
Words by: Todd Klein
Published by: Dark Horse Comics
This read came about based on a recommendation from the guys at Fanboy Comix  We Were having a discussion about the great work Jeff Lemire has been doing and they said I needed to check out ‘Black Hammer’. I had heard of ‘Black Hammer’ but didn’t really know much about it. The general premise is this: a group of superheroes from another universe were wiped out by a huge crisis and low are confined to a small town in which they live together, posing as a dysfunctional family living on a farm. This story is a great blend of classic, golden-aged superhero and gritty, creator-owned. It’s a fantastic story that gradually unveils more backstory around each character while they continue to try to find their place in this new world, even after 10 years. Check it out! 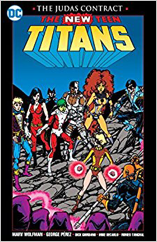 The New Teen Titans: The Judas Contract
Written by: Marv Wolfman
Pencils by: George Perez
Inks by: Dick Giordano, Mike DeCarlo, Romeo Tanghal, & Perez
Colors by: Adrienne Roy & Anthony Tollin
Words by: Ben Oda, John Costanza, Todd Klein, & Bob Lappan
Published by: DC Comics
I’ve always loved Dick Grayson so I thought it was time to finally read the full story of how he evolved from Robin to Nightwing. I now understand why this story is a classic and why The New Teen Titans was DC’s best selling title at the time. For a story about “teens” a lot of the content is very mature and advanced, even with the inclusion of Garth (Beast Boy). It’s great to see so many elements that are spoken of in such high regard in the DC Universe in addition to the debut of Nightwing like Dick and Kory’s relationship, the growing threat of Deathstroke (here called the Terminator), and a great team book that wasn’t just dirivitive of the Justice League. If you’re looking for a great, classic story that has ramifications for decades to come, then this is a great story to jump in to.
Pull List
Posted by Chad and Wess Make a Podcast at 5:49 PM No comments:

“War of Jokes and Riddles Part One”
Written by: Tom King
Pencils & Inks by: Mikel Janin
Colors by: June Chung
Letters by: Clayton Cowles
Cover by: Janin
Published by: DC Comics
**MINOR SPOILERS AHEAD**
Tom King has been teasing this epic Bat-story for a while and we’re finally going to see a payoff. This story takes place about a year after the infamous “Zero Year”. The Riddler is still in prison and the Joker has been on the scene for a little while but has lost his ability to laugh...all because of Batman. We’ve seen some great takes on Batman and Joker’s relationship of the years. Most recently in Scott Snyder and Greg Capullo’s runs on Batman with “Death of the Family” and “Endgame”. We’ve gotten so used to the idea of that Batman and Joker might actually need each other that no one has ever tackled what Joker was thinking when Batman came on the scene. This looks to correct that.
For a story that takes place in the past, many people, myself included, wondered what would the outcome of the cliffhanger from the previous issue be. Here we do start to get an answer. The issue is narrated throughout from Bruce’s perspective. Then, at the very end of the issue, you see that he is recounting this tale to Selina Kyle as they lay in bed. He says he needs her to know what happened (presumedly before we get an answer to THE question from last issue).
Riddler’s status has definitely been elevated by Snyder and Capullo so it’s great to see a story begin that pits himself against the Joker. Two very different individuals who have gimmicks that, on the surface, might be mistaken for the same idea.
Mikel Janin is on art duty for this arc and while I typically don’t find his work as mature as David Finch’s (who’s also worked on this run), It is nice to get something different every once in a while. He has great composition, and while I think his work looks a little flat, he does a great job framing a scene.
If you haven’t been reading Batman then 1) you’re missing out and 2) then this is the place to start.
Grade: B+
PULL LIST


Marvel Comics
Posted by Chad and Wess Make a Podcast at 9:58 PM No comments:

It’s a smorgasbord of movie news and Chad & Wess envision a world in which the original Star Wars trilogy gets remade! Also, there’s a giveaway!!

Oh man, where to start with this one? Scott Snyder has been teasing this event (or prelude to an event) for a little while and we're finally getting our first taste as to what to expect in the DC Dark Multiverse.

For those of you out of the loop, the DC Dark Multiverse is the idea that beyond the normal understanding of a multiverse, there is also a darker, almost mirror-imaged version of the multiverse. And the links to that universe are in the metals.

Here, Scott Snyder does a great job of linking this story all the way back to his New 52 run on Batman and his first arc, "The Court of Owls". We also see links to "Endgame" here as well. And these moments don't feel forced. This feels like the next logical progression for where his version of Batman needs to go.

And one of the great things here is that this isn't just a Batman story. In just this first issue alone we have Bats, Green Lantern (Hal Jordan), Duke Thomas, Hawkman, Superman, Aquaman, Mister Miracle, Mister Terrific, and (at least a tease) Plastic Man.

You would think that a lineup of that many characters, some of whom we haven't seen much of in the Rebirth-era, would be a lot. Add in three different artists on normal length book and it sounds downright claustrophobic. But that's one of the best things about the issue is that everything seems so balanced. The use of the artists has a great flow and coordinates well with the books' use of characters. But then again, when you have the biggest names in comics working on a book together, that's what you would expect.

Do yourself a favor and GO GET THIS BOOK! I believe the fallout from this story will be impacting the DCU for decades to come.


Posted by Chad and Wess Make a Podcast at 10:54 PM No comments:

This week was a week of beginnings and endings across comics. 'Dark Knight III' and 'Reborn' complete their runs, Marvel launches a new 'Darth Vader' title, and in 'Batman' it's a little bit of both.

As we reach the end of King's "I AM..." trilogy and prepare for "The War of Jokes and Riddles", there's a bit of unfinished business for Batman with Gotham Girl and Catwoman. There's a great approach here with the art where we get to enjoy Clay & Seth Mann during pages with Gotham Girl and David Finch & Danny Miki on pages with Catwoman. The new comers and old faithfuls on art lend credence to the idea that this issue works as both an epilogue and prelude for these chapters in Gotham.

In this issue, King delves further into the psychology of Batman by asking the question "Why aren't you happy?" Bruce references his duty as Batman and how that it his pursuit of happiness that drives him only to be found wanting. It's in this dialogue that Bruce finally decides he does have an option on how to be happy...

Posted by Chad and Wess Make a Podcast at 9:31 PM No comments:

​Wess tries to be objective while Chad tries not to offend too many people.