SOO many great books this week! Check out this week's Must Reads by looking down below! They'll be labeled in green!

Caution reader! There are spoilers to be found ahead for Marvel Legacy #1! 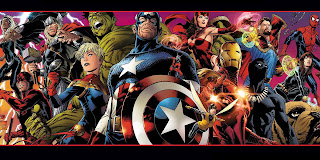 This is, hand-down, Marvel's most important book of the year, if not of the last decade. After seemingly listening to the fans crying out for Marvel to not forget the characters that made their books great, we get Legacy #1.

One of the reasons I haven't been able to get into a lot of Marvel books lately is because I don't recognize any of the heroes. There has been a different Iron Man, Hawkeye, Hulk, Spider-Man, Captain America, Thor, Ant-Man, Wasp, etc, etc etc. And it wasn't as if these characters were bad or shouldn't have existed, but it doesn't mean leave your money makers out to dry.

For anyone who hasn't been reading Marvel comics in a while, you may be confused by some of the characters you see and the state of things; but, a quick recap online will get you all caught up and you'll be ready to jump in.

Jason Aaron begins to tell a story that looks to play out through Legacy of a long-dormant Celestial on Earth and it being awakened, all while being supported by side stories that set up narratives for what will be going on in other books. All of the pieces are in place for all of the heroes you love to find their way back into the spotlight.

Oh yeah. **SPOILERS** (Highlight the section below to reveal spoilers)


...and so is the Fantastic Family.

Posted by Chad and Wess Make a Podcast at 8:39 PM